And here we are for the seventh installment of Tackling Poe: The Complete Works. This segment will finally conclude all of Poe’s short stories. As always, feel free to check out my Dictionary of Purple Prose to see new words I’ve adopted from his texts, or use any of the free resources linked below to read/listen to the stories.

The final short story line-up is:

And a meme, because you always need one: 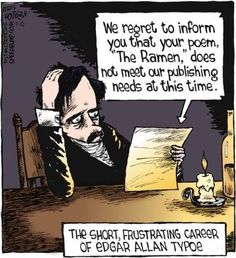 Summary: The friend of an artist narrates a voyage from Europe to the Americas with his artist friend, who has a strange and particularly odorous, oblong box.

Review: Classical Poe. The narrator is a bit dense, for what he observes, but this is a great story that gets right to the tension of the moment. I enjoyed it quite a bit (and again see why his horror and macabre works are some of his more better known writings).

He had been with me a fellow-student at C- University, where we were very much together. He had the ordinary temperament of genius, and was a compound of misanthropy, sensibility, and enthusiasm. To these qualities he united the warmest and truest heart which ever beat in a human bosom.

Summary: A man, amidst a fight with his wife, suddenly and inexplicably loses his voice. As a result, people think him to be dead, no matter how much he flails.

Review: Another one of the absurd, leave-your-logic-at-the-door tales, but a funny one. It was an interesting consideration of what is and isn’t possible because of our breath, and the way society reacts to his handicap amuses as well. There was also a healthy amount of old-fashioned cursing, which is always fun. I do recommend this one, for sure.

I must besides do the driver justice to state that he did not forget to throw after me the largest of my trunks, which, unfortunately falling on my head, fractured my skull in a manner at once interesting and extraordinary.

And (possibly the first utterance of “write what you know”?!):

Every author should confine himself to matters of experience. Thus Mark Antony composed a treatise upon getting drunk.

The Man that was Used Up

Summary: A narrator describes his frustrating attempts to get to know more about the Brevet Brigadier General John A. B. C. Smith.

Review: I found this tale quite amusing, in its strange and far-fetched way. As with a lot of Poe’s macabre/bizarro tales, you sort of have to leave logic at the door and accept peculiarity and Uncanny-ness.

I wish to God my young and talented friend Chiponchipino, the sculptor, had but seen the legs of Brevet Brigadier General John A. B. C. Smith.

But although men so absolutely fine-looking are neither as plenty as reasons or blackberries, still I could not bring myself to believe that the remarkable something to which I alluded just now,- that the odd air of je ne sais quoi which hung about my new acquaintance,- lay altogether, or indeed at all, in the supreme excellence of his bodily endowments.

“Bless my soul!- blood and thunder, and all that!- prodigies of valor!- heard of him of course?- you know he’s the man-” (as the most repeated line of the tale)

Summary: Our business man, a crook and cheat, details the very “respectable” nature of his odd-jobs.

Review: Another amusing story that I enjoyed quite a bit, mostly for its tongue-in-cheek. I recommend taking a look at it; I found it a really interesting period story.

I am a methodical man. Method is the thing, after all. But there are no people I more heartily despise, than your eccentric fools who prate about method without understanding it; attending strictly to its letter, and violating its spirit.

The frauds of the banks of course I couldn’t help. Their suspension put me to ruinous inconvenience. These, however, are not individuals, but corporations; and corporations, it is very well known, have neither bodies to be kicked nor souls to be damned.

Summary: This is a much shorter version of “The Domain of Arnheim“, and in my opinion, the better version. Both stories seem to have been written in the same year (1850).

Review: A blogger over at Blogger suggested that this story may be one of Poe’s most important works. While I feel that point is certainly debatable, it is a story of a different flavor for Poe, and in this shorter version, which gets right to the quick, as it were, the message of attaining happiness, and cultivating art are much more clearly given to the reader. If you were to pick only one of the two to read, I would suggest this one, hands down.

…in general, from the violation of a few simple laws of Humanity, arises the Wretchedness of mankind; that, as a species, we have in our possession the as yet unwrought elements of Content,- and that even now, in the present blindness and darkness of all idea on the great question of the Social Condition, it is not impossible that Man, the individual, under certain unusual and highly fortuitous conditions, may be happy.

He admitted but four unvarying laws, or rather elementary principles, of Bliss. That which he considered chief, was (strange to say!) the simple and purely physical one of free exercise in the open air.

His second principle was the love of woman. His third was the contempt of ambition. His fourth was an object of unceasing pursuit; and he held that, other things being equal, the extent of happiness was proportioned to the spirituality of this object.

With her details we shrink from competition. Who shall presume to imitate the colors of the tulip, or to improve the proportions of the lily of the valley? The criticism which says, of sculpture or of portraiture, that “Nature is to be exalted rather than imitated,” is in error. No pictorial or sculptural combinations of points of human loveliness, do more than approach the living and breathing human beauty as it gladdens our daily path. 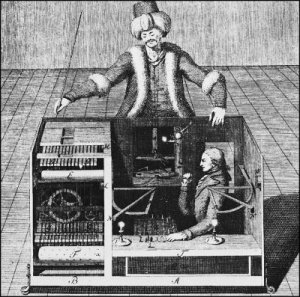 Summary: A story is actually an essay that was written in order to expose a fraudulent automaton that had been quite popular and widely toured in Poe’s time. While Poe’s suggestions for how the machine was operated were mostly wrong, the work became important for some of the more analytic foundations of modern science fiction. It was widely praised during its publication, with The New Yorker stating that it’s only fault was that it was too long (and indeed, at almost 10,000 words for an essay, I think so!)

Review: I found this essay interesting, if a bit long, and at times confusing with its wording for placements (where, exactly, were the man’s legs?). I think its interest is especially high because of the real life connection to the automaton scam. Worth a read, but it’s not essential to pay attention to every word of detail when he’s outlining the machine’s physical attributes.

The Power of Words

Summary: Two angels, Oinos and Agathos, talk of creation, God, and the act of motion as a vehicle for creation.

Review: Despite what it sounds like, The Power of Words is actually not a terribly religious story, and I find it to be one of Poe’s more poetic shorts. I highly recommend this one, just for the guilded language. One I could read a few times.

OINOS. I clearly perceive that the infinity of matter is no dream.

AGATHOS. In the beginning only, he created. The seeming creatures which are now, throughout the universe, so perpetually springing into being, can only be considered as the mediate or indirect, not as the direct or immediate results of the Divine creative power.

OINOS. Among men, my Agathos, this idea would be considered heretical in the extreme.

AGATHOS. Among angels, my Oinos, it is seen to be simply true.

Is not every word an impulse on the air?

And, for the final line, they speak of a star:

Its brilliant flowers are the dearest of all unfulfilled dreams, and its raging volcanoes are the passions of the most turbulent and unhallowed of hearts.

The Colloquy of Monos and Una 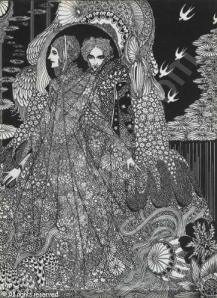 Summary: Two lovers recount their lives. Una asks Mono to speak of his death, and Mono obliges in great detail.

Review: This is actually one of the few works of Poe I’ve come across where the state of death is written about in an almost uplifting fashion. Like the story before it, the writing is top-notch, and the speculations on what death must “feel” like were fairly interesting.

Alas! as it grew, so grew in our hearts the dread of that evil hour which was hurrying to separate us forever! Thus, in time, it became painful to love. Hate would have been mercy then.

In Death we have both learned the propensity of man to define the indefinable. I will not say, then, commence with the moment of life’s cessation- but commence with that sad, sad instant when, the fever having abandoned you, you sank into a breathless and motionless torpor, and I pressed down your pallid eyelids with the passionate fingers of love.

…I was not unconscious of those movements which displaced you from my side, which confined me within the coffin, which deposited me within the hearse, which bore me to the grave, which lowered me within it, which heaped heavily the mould upon me, and which thus left me, in blackness and corruption, to my sad and solemn slumbers with the worm.

The Conversation of Eiros and Charmion

Review: An interesting take on the end of the world, through a method which I assume hadn’t yet become overly popularized in Poe’s time. As for the actual prose, I’ve got no real opinion- it’s fair, but it’s not his best.

…an incubus upon our hearts…

Summary: A Hebrew family encounters a harrowing shadow on the wall during the wake of their relative.

Review: I’m on the fence with this one… it was a little too short to build up the suspense I felt it needed for its ending, but I didn’t dislike the story either.

And with Shadow, I am finished reading and reviewing all of Poe’s short stories! Next time, we’ll be taking a look at Narrative of A. Gordon Pym, Poe’s only complete novel. I know very little about it, so it should prove interesting.

If you’d like to read any of the other parts, feel free to check them out below: