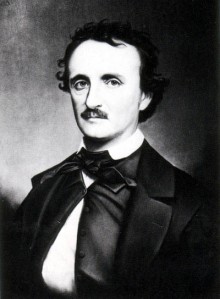 As one of the most famous and prolific writers to come out of the 19th century, Edgar Allan Poe remains a haunting enigma and inspirational powerhouse to readers and writers everywhere. He is considered the father of detective fiction (often attributed to “The Gold-Bug” which was published in 1842, though there is an earlier story, “Murders in the Rue Morgue” which was published in 1841) and is one, if not the, master of Gothic and macabre prose.

Poe led a devastatingly painful and complex life, of which historians have detailed to the best of their ability, but the circumstances that led to his death in Baltimore are still a mystery, with dozens of theories ranging from epilepsy to cooping, as Matthew Mercier of Tor writes. He was born in 1809, and the following year, his father (an actor) abandoned his mother (an actress) and him. The year after, Poe’s mother died (and oddly, his father died elsewhere two days later), and he was taken in by the Allan family, who never adopted him officially. He also married his 13-year-old first cousin, Virginia Clemm, in secret. Though they were married, there are some that believe that they never actually consummated that marriage (and there is at least enough evidence to assume that they did not consummate it while she was a child), as Virginia died when she was 20 of tuberculosis. Poe was devastated, and it is widely accepted that the horror of her death, mixed with all the other deaths he had seen in his life, greatly changed the tone of his later stories. [Detailed chronological bios can be found here and here.]

He spent time as a soldier, a literary critic, editor, and of course as a poet and author. He served in the army for two years, having entered as a private after lying about his age (he said he was 22, and he was actually only 18). His time as a literary critic and editor earned him many enemies in the literary community, and he was known as being harsh and a bit of an intellectual-snob (though he, ironically, was precisely against the establishment of those “elegant men of leisure”). The rivalry was so intense that it actually led to some literary sabotage after his death, when Rufus Wilmot Griswold wrote an obituary that defamed Poe as a drug addict and madman. It included Poe’s “own” letters as evidence (which were later discovered to be forgeries), and because it was the only full biography available at the time, much of what Griswold said passed on into popular knowledge. (This is actually scarily similar to the recent Wikipedia scandal involving Robert Clarke Young, and his false edits on the Wiki page of the late Barry Hannah.)

Suffice to say, the man led a really interesting life, though I imagine he would have never used that word to describe the grief and stress of it himself.

One of the first things I picked up when I got my Kindle was Edgar Allan Poe: The Complete Works & Tales. For only .99, it’s a fairly good deal (though all of Poe’s works are now public domain, and can be found for free in numerous places online), but the formatting is a bit rushed. For instance, each short story is not its own chapter, so it is hard to keep track of your location, and if you use the time gauge to see how much more reading you can fit in, you’ll be disappointed. I’m also not entirely sure of the method behind its organization; the book opens with the fairly boring and long-winded tale of “The Unparalleled Adventures of One Hans Pfaall“.

In any case, since I made a promise to myself to review everything I read this year, I’m going to be making a series of posts titled “Tackling Poe”. I’ll provide online links to all of the stories I mention to the best of my ability, so you can read the stories that sound interesting to you. I think the series will be about 10 parts in all. Since this post is already quite long, I’ll only be reviewing “The Unparalleled Adventures of One Hans Pfaall” this time.

The Unparalleled Adventures of One Hans Pfaall

[This blue button will take you directly to the MP3 audio file of the story on Lit2Go. If you would like to read the story in its entirety, please visit their website’s page: http://etc.usf.edu/lit2go/147/the-works-of-edgar-allan-poe/5257/…]

Summary: One day in the town of Rotterdam, a marvelous flying contraption baring a denizen of the moon lands in the central square. The alien brings a long message, a manuscript, with him, written by Hans Pfall, who details his scientific ingenuity in reaching the moon. The manuscript ends with a request of pardon for some ‘accidental’ murders, in exchange for more information about the moon and its inhabitants. However, by the time the city council decides to offer said pardon, the moon-being is gone.

Though the above would seem like a spoiler, it’s actually not, as the main body of the story is in the manuscript itself, written from Mr. Pfall’s own perspective. It begins with explaining his money troubles, and the dually-agreed upon separation from his wife, before convincing financial officers to invest in the building a great balloon with the ability to travel to the moon. Afterwards, the story linearly follows his voyage, and then landing.

Review: This was a really hard story to get through. It is clear in his writing that Poe is enamored with mathematics and science (being a contributor to the budding science fiction community of the day). There are long passages that detail all of the special little quirks of his machine, and how he can make breathable air with a special, pressurized contraption. It goes through great depths to make the whole concept of flying to the moon in what is, essentially, a hot-air balloon remarkably believable.

But, there isn’t really a narrative here worthy of 18,000 words. The very beginning and the very end were quite fun to read, but having been familiar with some of his more well-known works, this story came out a bit of a disappointment. Especially since it was the opener for the entire collection, I felt it should have been a stronger piece.

Still, there are some very nice gems from the ‘golden age’ of literature to be had:

I believe, and still do believe, that truth, is frequently of its own essence, superficial, and that, in many cases, the depth lies more in the abysses where we seek her, than in the actual situations wherein she may be found.

and here, as Hans explores the moon:

Now there were hoary and time-honored forests, and craggy precipices, and waterfalls tumbling with a loud noise into the abysses without a bottom. Then I came suddenly into noonday solitudes, where no wind of heaven ever intruded, and where vast meadows of poppies, and slender, lily-looking flowers spread themselves out a weary distance, all silent and motionless forever.

as well as here (the same page):

And I have in mind that the shadows of the trees which fell upon the lake remained not on the surface where they fell, but sunk slowly and steadily down, and commingled with the waves, while from the trunks of trees other shadows were continually coming out, and taking the place of their brothers thus entombed.”

Overall, the beginning and the end make for very good reading, but if you find yourself growing bored with the middle parts, don’t worry about skipping ahead a bit or skimming–you won’t miss much.

23 thoughts on “Tackling Poe: The Complete Works, Part I”